As a young drummer, I would play for hours a day. Practicing never felt like a chore and it seemed that I made improvements each and every time I sat down at the kit. But once I became immersed in formal study, and later, playing for a living, I began to find it difficult to retain the same level of enthusiasm for drumming that I once had. In short, I had become burned out! I no longer looked forward to spending time at the kit and my sense of creativity had long been replaced with regurgitating uninspired patterns and fills that held no emotional connection with me. What had happened? After some soul searching, I realized the answer to this question was simple and yet quite profound: I no longer “played” the drums when I practiced.

What do I mean by “playing” when practicing? Well, in my youth, I would balance working on my weekly assignments with activities such as making up short little “drum songs”. Or I might try rearranging my kit to see if I could play left handed. And I almost always devoted time to playing along with my favorite records (yes, RECORDS!). As an adult/professional the majority of my time was spent learning specific material for upcoming gigs or plodding through countless technical exercises that had little to do with actually “playing” music. Although these studies were essential for my professional survival, they did little to keep me engaged or inspired.

So I set out to develop and/or collect some exercises, or “musical games”, that stressed creativity and musicality and make them part of my practice routine. The results have been both eye-opening and inspiring! My improvisation skills have grown by leaps and bounds and I feel a much greater connection with the instrument. Granted, I still need to work on technique and keeping up with my playing commitments. We all do! But I now look forward to and appreciate the time I get at the kit and no longer equate practice with work. And what’s really great about these types of exercises is that it doesn’t matter what level you’re at in your development! I have passed these on to students of all ages and abilities and have marveled at how quickly their confidence, command of the instrument and, most important, sense of enjoyment have grown!

I have discovered and created countless musical games that have inspired me in this quest and have listed a few of my favorites (along with some examples) below.

1) Create limitations. Sometimes it can be overwhelming when you’re told you can play whatever you want, HOW ever you want. Try limiting yourself to using just two drums. Or maybe only half notes and quarter notes. Play an 8 bar phrase using only metal sounds (cymbals, stands, rims, etc…) You get the idea.

2) Play over an ostinato. “Ostinato” is just a fancy word for a repetitive pattern. Start by playing something as simple as quarter notes on the bass drum or maybe your right hand on the ride cymbal. Then, at the same time, improvise on the rest of the kit. As you gain confidence, you’re ostinatos can become more involved.

3) Mix and match different implements. Here’s a fun a game! Throw a bunch of sticks, brushes, and mallets into a bag. Then, throw in some common household objects like pencils, coins, or an empty water bottle… whatever! Sit at your drums and without looking, reach into the bag and pull out the first two implements you grab. Using only those two tools, compose a short piece of music.

4) Incorporate melody. Try playing the rhythm of a well known melody (Ex. A) on the snare. (Ex. B) Next, move it around the kit and try to make a difference between long and short notes (Ex. C). Then, try to find ways to suggest the actual pitches of the melody on the set (Ex. D). Here is a link to a short video of me demonstrating this playing “Seven Nation Army” on the drums: https://www.youtube.com/watch?v=2FSUxV2htg0 Also, check out drummer Ari Hoenig to see how a master does it!

5) Release the snares! This is a simple one. When you’re trying to improvise but find yourself playing the same old thing, reach down and release the snare strainer. This forces you to really listen to what you’re playing and to use the snare to interact with the rest of the kit instead of as a “home base”.

6) Listen to yourself. Playing along with a metronome, loop, or song, improvise a one or two- bar phrase and then immediately repeat it back verbatim… stickings and all. See how many times you can do this without missing and then try to beat that number the next time. This is much more challenging than you might imagine!

7) Use alternative muses. Basically, a “muse” is a source of inspiration. Look for nontraditional devises to spark your creativity. For instance, try putting on a movie, turn the sound all the way down and improvise a new soundtrack. Say your phone number out loud, listen to the rhythm that it makes (Ex. E) and use that as a fill (Ex. F). Hold a stick high above the kit, let it drop, take note of the first three sounds you heard and then use them as the theme for an extended solo.

I encourage you to take 5 or 10 minutes to incorporate these, and any other creative studies, into your practice routine each day. You’ll love the results! 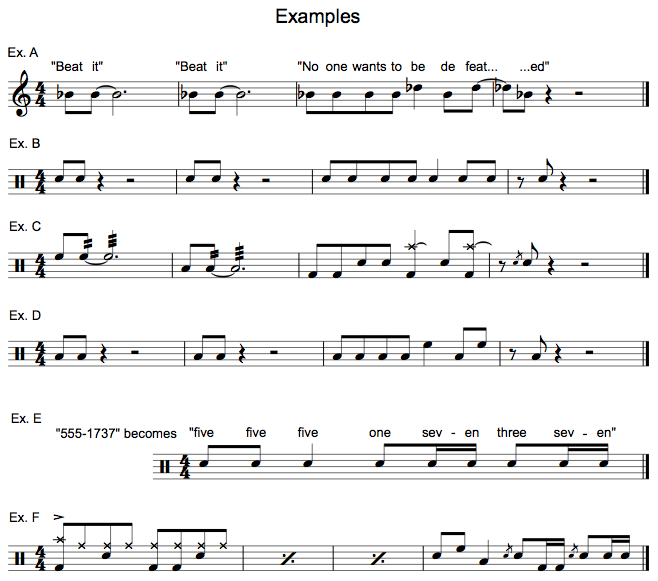